What can I learn?

It was easy for me to identify the best leader I ever had. When I was still in college I had an admin job in the office of a small construction company. My boss, the office manager, was very direct with me from the first day, telling me “I want you to not only learn everything I know, but also outgrow my skills and knowledge.”

What can I learn from that? She was confident in her abilities and value to the organization. She did not feel at all threatened by me, even as she understood one day my value to “someone” might be greater than hers. She wanted to mentor me and help me grow.

The worst leader, there’s been a couple so I’ll meld them into one, since some characteristics were very similar. They used their power to diminish me. Their tone in “instructing” was threatening rather than guiding or supporting. One of them out and out lied and used gaslighting to try and “control” me.

I need to be honest, authentic, and trustworthy.

What can I learn from those experiences? When I am in a more “powerful” relationship (e.g. with students) I need to continually reflect on my behavior and make sure I am using that power to guide, support and mentor rather than break down. I need to be honest, authentic, and trustworthy.

I read the prompt and mentor poems shortly before heading out on a lengthy walk. Near the end of my walk, I stopped to check out this odd-looking structure. I have driven by it dozens of times thinking it was the homeowner’s idea of interesting yard art. But no, it contains offerings of free flower bouquets, undoubtedly from the homeowner’s yard, in the style of the Little Free Libraries. What a gift! 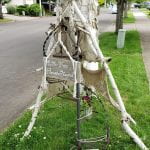 humbly I stand erect
assembled of free materials
gathered nearby

The prompt for this was to describe my first cup of coffee.

Milk, juice,
perhaps water.
Why would
anyone
choose to drink
coffee?

To be sure,
the aroma
is magnificent,
as is
the idea of
cold hands
wrapped around
a steaming mug.

And the coolness factor,
except I wasn’t a cool kid.

Like many a college student
one night I
had
to stay up
and study.

And my
gallon-a-day
habit
was born.

Today’s prompt included reading Burning the Old Year by Naomi Shihab Nye. Much shorter than I expected, it was full of superb imagery. My poem’s title is lifted from one of her stanzas:

So Little Is a Stone

fame, fortune, flamingly fleeting
so little is a stone

today’s news, yesterday’s regrets
so little is a stone

connections with those we love
are the stones worth anchoring

The prompt for today was about “core memories,” and many people posted delightful, positive memories. I have some of those too, but what came most strongly to mind were the hurts, the dysfunction I grew up with. I understand that my parents did the best they could with the tools they had. As an adult, I also know they love me, they just are extremely crippled in their ability to express it.

things that still hold me

After thriving through 31 straight days documenting Slices of Life, I decided to embark on the #verselove challenge for April, National Poetry Month. I find writing poetry daunting and intimidating, so expect this to be a growth experience!

Today, we’ve been prompted (but definitely not “required”) to write an #acrostic poem. Here goes.

For my unforgettable Meliora students:

Many are the smiles you’ve brought me
Even though our days have not been perfect.
Loud peals of laughter
Interspersed with sighs of frustration,
Outlining magnificent theses,
Reading *ridiculous* books,
Always, always digging deeper.

Steadfastly building new skills,
Theatrically defending points of view,
Understanding why others disagree.
Daring to plunge in, wrestle with
Elaborate new ideas and tools.
Never giving up, instead
Tenaciously trekking through
Showing up for me, for you, for us.

5 THINGS I AM GRATEFUL FOR EVERY DAY:

4 THINGS I AM PLANTING IN MY GARDEN (right now):

3 THINGS I HAVE ALREADY ACCOMPLISHED THIS WEEK:

2 THINGS I WANT TO DO TOMORROW:

1 THING I AM MOST EXCITED ABOUT TODAY: 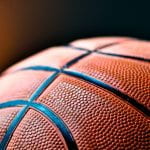 Several days ago, I wrote about rooting for underdog St Peter’s in the NCAA basketball tournament. Ranked #15, they toppled #2 seed Kentucky. A day or two later, they won against #7 Murray State to enter the Sweet 16.

This evening, they played against #3 seed Purdue, and won! This is the first time in NCAA history that a team of such low ranking has won a spot in the Elite Eight. As I was perched on the edge of my seat, I intentionally sought to understand the attributes this team has that have led them to perform so well.

I need to take a page from their playbook in my own coaching and team endeavors.

P.S. I’m already getting my pom poms ready to cheer them to victory in their next game, the day after tomorrow.

I’ve just returned from a magnificently invigorating couple of hours. I attended a workshop on “improvisational leadership,” in which we played a series of improv games and created scenes and talked about how “yes, and…” applies to leadership.

I fully appreciate how theatrical improv can be a teaching tool across disciplines, and was happy to be reminded of some fundamental concepts.

I was even more thrilled to have the opportunity to get into character on the spot, to be cast as an “angry plumber,” and to let my imagination run amok with it. To shout at the audience about how their hygiene habits make my job difficult. And how my therapist is helping me with anger issues. And exaggeratedly taking deep breaths to “re-compose” myself.

So often, I feel cast as “teacher,” “wife,” “mother,” “responsible person,” all worthy roles, yet this unexpected side is what nourishes my soul in ways that rejuvenate me like none other.

Day 7, a full week. This is my first year as a “slicer,” so wasn’t sure what to expect. I’ve seen a bunch of Tuesday slices over the years, primarily from #clmooc compatriots, and have been… well, chicken to try it for myself. The experience has been freeing! I tend to become way too pedantic in my posts in this space, citing numerous sources, providing evidence of  my claims. Which is a laudable habit for formal writing.

#SOL has a much more casual air, with writers talking about many topics, from the mundane to the profound. In a few words, or in many.

I spend a lot of time telling my teen writers that we are writing “for fun” with flash fiction assignments, everything from six-word stories to 100-word stories based on an image/picture. Initially, students are reluctant to embrace the “fun” part, and agonize over their stories being “right” or “good.” I hope (and think) they are learning this kind of writing truly is fun, allowing us to let our imaginations go, to be as crazy, dark, goofy, cliff-hangerish as we want. A few examples:

“I saw the lives of all three flash before my eyes as they ate. In the corpulent, red face of the emperor, I was afraid, as I saw greed in his small black eyes, as he shoveled food down his maw. The king was of more refined corporeality, although his haughty gaze glared with the contempt of ignorance of life’s struggle, and the discontent with luxury. But of the peasant mans face, , I saw nothing but simple happiness, for his was dinner hard worked for, and the omniscience of his world in his eyes made his dinner taste the best.”

“With flurries in their eyes, and chills through their bones, they trudged forward. Stinging pains crept through their whole body, when they finally saw billowing smoke in the distance. Like a rose amongst jasmine, a scarlet cottage had been hidden in the icy dunes. The house had a golden glow coming from its lone window, but oddly, not a single door. As they took a step onto the frozen pond to reach the house, they began to flip, along with the whole landscape. The cottage’s grayed reflection in the pond had spun upright taking them to the warm world beneath.”

“How can I describe this family? The Mashes had a buttery way about them, sometimes they were salty about things, but always a pleasant treat.”