The 2021 #writeout theme is Palettes, Storyboards, and Cadences, which meshes well with my recent reflections regarding layers of color. My musings started as I was madly turning peppers into jelly; peppers of all the autumn palette — shades of yellow, orange, red, combined with others that were green, reflecting the green lawns and other vegetation still in a robust phase of life.

The flavor palettes of the resulting jellies are also layered, with the melding of the aromas and different levels of spiciness. My recipe has been pretty straightforward – take a bunch of whatever peppers are on hand, de-seed and finely chop them (hurray for food processors), then boil them with pectin and sugar. Five minutes in a boiling water bath to seal the canning jars and the job is done! Since the medley of peppers has been different for each batch, the resulting yumminess is one-of-a-kind, never again to be exactly duplicated.

Simultaneously, the tree and shrub color palette here in the Willamette Valley of Oregon has been gradually changing for six weeks or more, seemingly with the softer yellows and oranges starting the cadence, followed by a crescendo of vibrant colors of deep orange and red. Recently, after a long period of drought, the skies have been leaden, with low-hanging clouds and rain, which further sets the striking colors in relief.

The precipitation and autumn breezes have caused many leaves to fall to the ground, where they are being trodden underfoot. As time passes, they will decompose and enrich the soil, helping the earth regenerate itself.

As the season marches forward at its predictable pace, a few outliers have emerged, such as this iris which seems to have forgotten it is meant to bloom in June. This reminds me of myself at times, especially when I get vocal about the necessity of #PBL projects being #authentic and #relevant instead of a pretend situation. When students are asked to write a letter or make a proposal, or tackle a #community problem, yet their work is never presented to the #audience in question, it diminishes the importance in their eyes, and lacks #realworld validation.

This and a few other iris arrived at my garden in early spring, a donation from another gardener in my new town. I am steadily building up the outdoor spaces, which eighteen months ago looked mostly like this, with a solitary earthworm plowing its way through the clay. I have added several tons of compost to the ground, and planted many flowers, shrubs, and a couple of trees, many of which attract pollinators and other wild critters who are native to this area.

Today, there is a growing abundance of edible and ornamental flora and fauna: 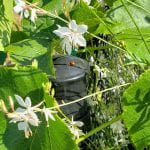 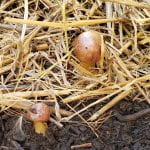 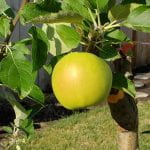 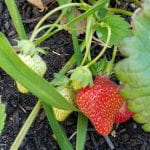 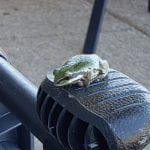 Nature is one of the best teachers, reminding us that if we honor it, follow its cadences, and learn by observation and experimentation, it will flourish. And, in the process, we will be nourished and also flourish.