I’ve been reflecting on my most recent post and the one before, which discuss work spaces, including classrooms. As I write this, I am in the midst of preparing our home to be sold. To make it more appealing, we have recently updated bathrooms and the laundry room. We are painting the walls to neutral colors. Not my preference, but what buyers want to see.

As I have made decisions on various elements, I have been apathetic. “Is the granite beige enough? It will do.” “Is it a faucet? Does water run through it? Sold.” The updated rooms look fresh and current, so are a success. At the same time, I have no particular attachment to them, as I expect to be vacating this home in a few months. And, since I didn’t improve the spaces for my own enjoyment, the changes don’t reflect “me.”

In contrast, my experience when we remodeled our kitchen several years was joyous. It was thrilling to choose countertops, cabinets, appliances, paint colors… I still love my kitchen.

This small personal example reinforces the various points Tim Harford makes in his book Messy: The Power of Disorder to Transform Our Lives. People want control of their work spaces.

My colleague Sheri Edwards zoomed out further on this discussion. As she puts it, we need a “thoughtful pedagogy” that focuses on learner-centered design. Classroom design is just one part of the picture.

Sheri Edwards recently posted about how working on hobbies helps instill a desire for #lifelonglearning and a willingness to #struggle. She pointed to #GeniusHour as one way to incorporate student-centered hobbies during the school day.

Absolutely! In my #PBL practice, I put a lot of thinking, planning/designing and #reflection into finding ways to make the academic work the teens do as compelling as possible. I apply the High-Quality PBL framework to my designs. As part of that framework, I offer students a lot of #VoiceAndChoice in how they develop their projects and in how they present their evidence of learning.

I commit to implementing projects that challenge, engage, and support students as described by the six #HQPBL criteria.

Notwithstanding, there are times I get frustrated with what I perceive as a lack of enthusiasm, or a lack of devotion to their work. It is in these moments that feedback from an outside audience reminds me of how capable these students are.

At our student showcase in December, a group was presenting a video documentary. They encountered some technical difficulties related to projecting from a laptop to a large screen. With no apparent anxiety, they persevered in their troubleshooting and soon the video was smoothly rolling for the audience to enjoy. 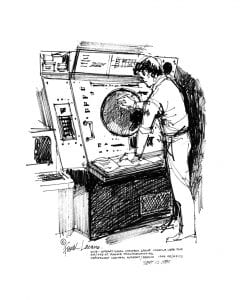 At the end of the showcase, one of the audience members came up to me and said, “Wow, it’s amazing that they knew how to fix the problem! I would have had no idea where to even start!”

It is true that my students, through regular practice, develop a variety of technology skills. Since they use #realworld tools and apps, and sometimes know more about the technologies they are working with than I do, they become adept at figuring things out. When they encounter #failure, or a product works differently than they expect, they momentarily retreat. Then, they consult among themselves, look at YouTube videos, “ask Google,” and occasionally even ask me.

In other words, they are #problemsolving, one of the “Seven Survival Skills” identified by Tony Wagner in his work on transforming education. It is moments like these that cause me to recommit to the chaotic, messy, exhilarating process called project-based learning.

Category: #DigiWriMo, PBL | 3 Comments on Why I do #PBL

We are wrapping up the first formal week of #CLMOOC 2017, where we were optionally (after all, everything in CLMOOC is optional) invited to add an introduction in Flipgrid. Flipgrid is a video-only platform, and my CLMOOC colleagues have used a variety of methods to introduce themselves; some funny, some serious, some silent.

I had the idea to create a video that emulates an old-style flip book, so went searching for a tool to use. I found FlipAnim, which seemed quite straightforward, a web-based app which had a short learning curve. The first (disappointing) thing I discovered is there is no “erase” or “undo” capability. The only way to remove mistakes is by deleting the whole “page.” The second “problem” with this tool is that the drawing is done using one’s computer mouse.

Even though I am left-handed, I have always used a right-handed mouse (maybe for the same reason I still use right-handed scissors – lack of availability when I first started using the tool?). When I was faced with the prospect of applying my atrocious right-handed drawing-with-a-mouse skills, along with the can’t-undo-mistakes reality, I sighed and considered finding a different app.

Then I thought better of it, and simply drew. I accepted that the result would be “primitive” at best. And discovered it was so liberating to play! I was relaxed and reckless as I created my crude facsimile of a girl with wild hair, and as I hand-wrote, er mouse-wrote my “credits.” Yes, the result is primitive, but it was such fun!

This experience ties in with the Twitter chats we had a few days ago, where a number of us acknowledged we feel we aren’t artists, that we are “bad” at art. 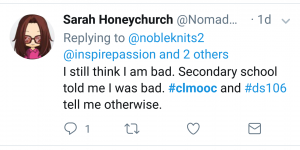 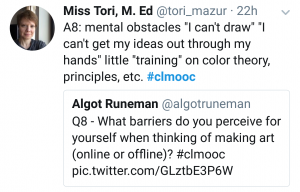 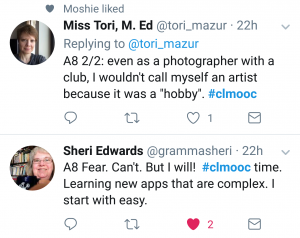 Our perception that we are not “artists” usually starts at a young age, oftentimes as the result of a classroom experience. My absolute favorite example of using a positive, iterative process to improve work comes in the form of “Austin’s Butterfly,” from Expeditionary Learning’s Ron Berger. In this process, instead of telling students their work is “bad” or “good,” peers offer “kind, specific and helpful” feedback. If you haven’t watched this video, DO! It provides such a superb example of how first-grader Austin steadily improves his work based on peer feedback, and how closely his final product resembles the photograph he was using as his model.

Confidence in the ability to continuously improve one’s work is a characteristic identified in Carol Dweck’s research on growth mindsets. It is interesting that many of us who participated in the CLMOOC Twitter chats demonstrated a fixed mindset regarding our artistic ability.

As we explored this discomfort and feelings of inadequacy further, we talked about the need to “play” with art, to have fun. Algot Runeman reminded us periodically how we need to treat ourselves more kindly, and to continue practicing. To allow ourselves to “stumble,” and to measure progress over time. 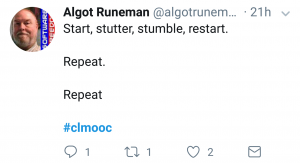 The point about the importance of play is well-argued in Stuart Brown, MD’s book Play: How it Shapes the Brain, Opens the Imagination, and Invigorates the Soul. As he says, “[p]lay is a state of mind, rather than activity” (p. 60). He further states “the impulse to create art is a result of the play impulse… art and culture are something that the brain actively creates because it benefits us…” (p. 60).