How to Be Truthful

don’t let others’
values replace your own

as time goes on
others will come
respectfully entreating
your counsel

Category: Poetry, VerseLove | 2 Comments on #VerseLove Day 19, How to Be

i wish the “experts”
would reflect honestly
and  acknowledge openly
so-called education “reforms”
are in word only.
erase the scribbled-on board
put the students in the center
and build a community
of communities
where we are all teachers
and all learners

middle management, respected
even admired by some
comfortable lifestyle
the world was my oyster

once upon a time…
I left that corporate world
to become a stay-at-home mom
by choice, with enthusiasm

once upon a time…
“what do you do [career]?”
“ummm, raise my children”
dead silence

today…
I hope my influence
is felt and appreciated,
that once upon a time…

was the right choice.

Today’s #verselove prompt was to write in a relaxed Tanka form created by Harryette Mullen in which the 31 syllables of traditional forms are broken into three variable-length lines.

in a brief respite of blustery weather
the sun warmed them and blessed their work,
they set their tools down just as rain and wind returned

In his introduction to today’s #verselove prompt, Andy Shoenborn states, “I believe a poem rests in wait within each of us.” As a neophyte poet, these are reassuring words. Andy asked us to write a paragraph of prose about a pair of shoes we’d never forget, then to “look for naturally occurring repetition, alliteration, striking images, and moments of emphasis fit for enjambments” and from there to create a poem that tumbles down the page. Here goes.

When I was five years old, my family lived in a remote location in southeast Alaska. Our food, as well as all other merchandise, was delivered in semi-regular fashion by boat, and later by small cargo plane. New clothing was a rare novelty, and something to be treasured. For whatever reason, I had been granted the purchase of a bright red pair of Mary Jane style shoes. I was delighted by this extravagance, and excitedly tried them on. From the get-go, they were tight, a bit pinchy. But, there was no way I was going to return these shoes to wherever they had come from. My mom queried me on whether they were too tight, but I insisted they were fine. Sucking in my breath and stiffening my upper lip, I gleefully went off to skip and play. I have no memory of how long I was able to wear these shoes before I truly outgrew them, but for a moment in time I was as grand as Dorothy in the Wizard of Oz.

A magical delight
a treasure
the mail delivery
a pair of red shoes
unexpected, yet
longed for

“are they too tight?”
“no! they are fine”
even though
they were not

We were asked to create a Gogyohka poem today, a freer form of Tanka. Our theme was Liberation and Joy. The following depicts a memory of the birth of my older son.

reluctant to exit the warm womb
you resisted for two weeks past the due date
and dug in your heels during labor
arriving at last with vigorous wailing
my beautiful long-lashed, copper-haired boy

she stood at stately attention
gowned in pristine white
flanked by her booster-knights,
Diana pursuing her Orion

poised for her “routine launch”
to send soaring seven souls
cradled in her tight embrace,
while mere mortals gawked

“officials discounted
speculation that
cold weather”
was to blame

meanwhile, the mourners,
among them Christa McAuliffe’s
family and students,
remained rooted in shock

I loved the idea of today’s “#quirky” #VerseLove prompt, but had a hard time identifying a topic. This poem talks about something that I certainly love, and that many people who know me best are surprised, nay, stunned to discover is a favorite form of play.

I want a ticket to the moon –
yes, and would you like to buy a constellation with that? –
yes, and a guitar to serenade the flight crew, too

improv is
the most
freeing,
uplifting,
quirky
thing I do

The #VerseLove prompt today challenged us to create a “definito,” a form invented by Heidi Mordhorst and described as “a free verse poem of 8-12 lines (aimed at readers 8-12 years old) that highlights wordplay as it demonstrates the meaning of a less common word, which always ends the poem.”

I have never heard of the word I tackled, but since I find etymology fascinating, it was worth digging into. I was exceedingly surprised to discover this word has increased in usage over time, as illustrated by this graph created from Google’s Ngram Viewer (thank you, Terry, for introducing me to this tool!) 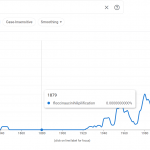 barely weighable, a flocci from the spring sheep
even less knowable, a whiff of an idea

closely followed by nauci
(nada, niks, nunda)
so forgotten it has no descendants

our minds are conditioned to nihili
Friedrich Nietzsche’s declaration
(or was it?)
that nothing has meaning

this morning, I found pili on my hairbrush
floating as nothing, and to no purpose

syllables chained together,
a mouthful at best

pushed along by –fication
along many tracks,
modification, vilification,
certification, gratification
to name just a few

combine these all
and you arrive at

floccinaucinihilipilification
a habit by some to
estimate things (people?)
as worthless