I spent much of today wandering through Shedd Aquarium in Chicago. Like all the major museums in Chicago, it is world-class, with intriguing exhibits showcasing the many critters that live in the waters around the world.

As part of my outing, I also visited the “Aquatic Presentation,” featuring Pacific white-sided dolphins, and several “guests” such as a red-tailed hawk. Of particular interest to me was a sea lion named Cruz. 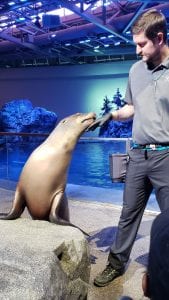 He is blind, due to gunshot wounds to his face when he was a pup. In the wild, he most likely would have perished. Instead, Shedd Aquarium adopted him, and he lives with a group of other sea lions. His trainer has used a long-handled rattle and auditory cues (including some words) to teach Cruz how to navigate his world (and how to wow the crowd!).

Shortly after Cruz’ arrival at the Shedd, his trainer stated, “[h]e has a fearless personality and eagerness to learn…” Wow! That sounds like any number of students who are eager to learn, yet are struggling in school because of circumstances or experiences we don’t know about or don’t understand. Instead of writing them off, we need to seek to understand.

He has a fearless personality and eagerness to learn…